Gettin' Groovy at the IndicThreads Conference On Java

This weekend I presented at the 5th IndicThreads Conference On Java here in Pune. This would be the second time I attended this conference and the first time I presented at it. I was pleasantly surprised that it turned out to be a whole lot more informative and entertaining than I expected.

Harshad Oak kicked off with the keynote on recent changes in the Java ecosystem. It touched on topics such as Oracle's purchase of Sun, new language features, other languages on the JVM and potential avenues for the growth of Java (viz, cloud computing and mobile development). He concluded with the interesting viewpoint that Java devs would do well to wait, watch and ride the change. 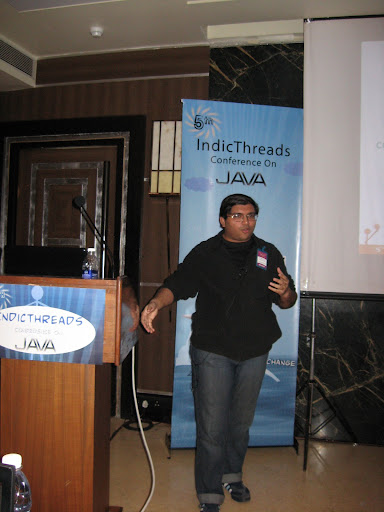 Having landed the first slot of the very first day of the conference, I was pretty nervous about setting the pace right for the event with my DSLs in Groovy talk. I think I did pretty well , especially considering I hadn't gotten any time to practice the deck... at all!

The presentation spun up quite a few interesting discussions such as:
A bunch of people asked me if there were any real world examples of Grails apps; I think the Testimonials page on grails.org should answer that sufficiently.


It was also nice to be followed by another presentation relating to Groovy. Aniket Shaligram of Talentica demonstrated the benefits and caveats of the flex-scaffold Grails plugin by quickly building an app from scratch within a matter of minutes. And I must say, I was very impressed by the Flex view scaffolding, much as I always have been by the HTML scaffolding in Grails. The one concern that I did raise was around this technique landing the team with two MVC apps that need to keep their models in sync; while Aniket assured me that they faced no major hurdles there, experience forces me to maintain a healthy dose of skepticism.

Another talk that was met with particular enthusiasm was Shekhar Gulati's demonstration of Spring Roo. Shekhar also live-coded a Spring MVC app with various bells and whistles (persistence, relationships, security, deployment to GAE, et al). The productivity accelerating qualities of Roo were intriguing, but I've always been a little reserved about it and about Spring MVC in general. I'll leave that argument to a whole other post. :)

The Unconference hour in the middle of day 2 was another highlight of the event. The group discussed various interesting issues such as:
In contrast to the rest of the event, the two presentations from event sponsor IBM were mostly J9 pitches- thoroughly passable.

The Sun (ok, ok Oracle) presentation on new features in Java EE6 was a welcome refresher. Considering I've been out of touch with that community for quite some time, it served to reintroduce me to a lot of tech as well as bring me up to speed with what's hot there. CDI's cute use of annotation based qualified DI caught my eye in particular.

The networking and open spaces weren't bad either. I got to catch up with a few old acquaintances, make some new introductions, add a few twitter followers and earn some cool hashcred! In hindsight, I actually regretted not getting business cards printed, but the second slide in my presentation pretty much made up for that.

The ThoughtWorks brand carried me well throughout the event even though I did absolutely nothing to indicate I was a ThoughtWorker (big shout out to good ole' TW!) A lot of people wanted to know how ThoughtWorks operates, why I left and what I'm doing now, why others have left and what they end up doing after ThoughtWorks- a somewhat muted (from my end) set of discussions, but very interesting all the same. People were usually pretty surprised when I told that that I actually quit ThoughtWorks to figure out what I want to do next and that I was currently voluntarily unemployed! :)

Well, since this is a fairly contrarian blog, here's what I wish would have gone better:
All in all, it was a weekend well spent. Kudos to Harshad, Sangeeta and the rest of the Rightrix team for another well organized event in the city. And thanks for keeping it eco-friendly!

Oh, and before I forget IndicThread Java celebrated it's 5th consecutive year this time, so we got to have cake! 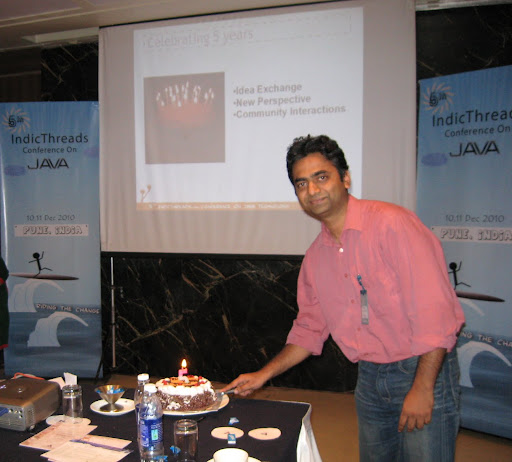